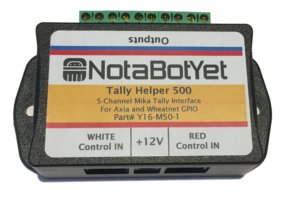 Sometimes, when building a facility, there just needs to be an easy way to control the tally light on multiple Yellowtec Mika microphone booms.  For a facility designer and/or installer, this usually means termination of the Mika mic boom cable on a 5 pin xlr or equivalent method and somehow splitting off the power lines for the tally light from the mic audio lines.  But then what happens?  Punch blocks?  Perf Boards? Spaghetti and relays?

This all takes a lot of time, effort, soldering and it never ends up as clean or neat as one would hope.  Wouldn’t it be nice if something came along to help make the installation cleaner?  And by the way, now that Mika tally lights can glow Red or White depending on the polarity of the voltage feeding it…so wouldn’t it be nice if a simple GPIO bit could trigger either the red or white tally lights, finally allowing use of both colors? 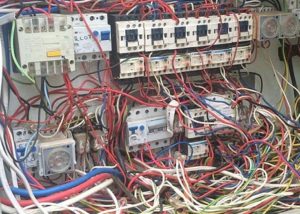 Spaghetti and Relays… Just like Mom used to make!

Enter the Tally Helper 500.  Like its little brother, the Tally Helper 100, when installing Mika mic booms, it can make some of life’s problems disappear.  Imagine having a nice clean phoenix-type screw terminal strip sitting there just waiting to have each of the tally wires locked down for a good, tight electrical connection.  Imagine not having to loop through a relay, krone block, scotch tape, or anything. Imagine having a power supply that connects to the device and provide a solid 12 volts of regulated power for up to five Mika mic booms.  Imagine an two easy RJ-45 connectors waiting to be plugged into a Axia GPIO ports or Wheatnet Logic ports or any standard GPIO type output that provide a closures to ground to activate.  Imagine being able to decide which GPIO input bit will trigger the red tally and which will trigger the white tally.  While that is quite an imagination, it is all real and ready to help.