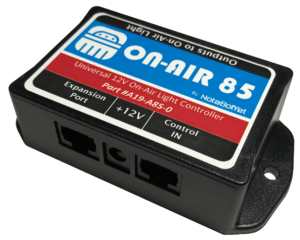 For those who were there, 1985 was a really cool year.  Once everyone got over the fact that 1984 did not turn out like George Orwell predicted, everyone relaxed a bit and we ended up with Back to the Future, the Nintendo NES, Calvin and Hobbes, Rock me Amadeus and more!  Michael Jordan was Rookie of the Year and it only cost $2.75 top go to the movies. (By the way, we will not be mentioning “New Coke” being released in 1985 as we are still denying it ever happened.)

The “on-air” light was there in 1985 as well.  It has actually has been around long before radio guys needed a way to silently inform someone to politely “shut the heck up,” with its history going back to movie sound stages where a red light known as a “Wig-Wag” was outside the door of a sound stage letting people know that cameras were rolling.  Today, lots of different manufacturers make all sorts of products for on-air indication outside a studio and many of these are now available in a LED flavor requiring a 12v power source to illuminate.  These are much safer to deal with than their 110V predecessors.  Unfortunately, the manufacturers still leave all the powering and controlling up to the end user in much the same way the old 110V versions were controlled.  Usually that means scavenging through the parts bin and heating up the soldering iron to come up with some sort of perf-board relay interface and power supply…all while staying busy keeping the station on the air, keeping the PD’s headphones working, and figuring out what else the new remote-tech broke this week.  If only there were a DeLorean we could use to go back in time and create something to help us install these 12V on-air lights in a quick and easy manner and free up our time, we would call it the “On-Air 85” and it would be available TODAY!

The On-AIR 85 from NotaBotYet is a universal on-air light controller designed to power and control most 12v on-air lights.  The unit is plug and play with Axia GPIO using our NotaBotYet Axia Breakout (Part #A15-B01-2) or can connect directly to the Wheatnet Logic RJ-45 ports.    The included power supply powers the control logic and provides power to nearly any 12v on-light from a variety of manufacturers like American Recorders, Titus, Sandies, CBT, and nearly any other 12v on-air light up to 900ma.  One simple open collector or dry contact closure to ground will activate the output that will power the 12v on-air light of the user’s choice.  And……since some users like their on air lights flashing, it can do that too…with not just one, but 14 different flashing and pulsing patterns to choose from!  All controllable from Axia GPIO or Wheatnet logic!  Let’s see your 1985 on-air light controller do that!

Inputs: Inputs are available on a convenient RJ45 connector allowing the use of standard Cat5/6 wiring to transport GPIO control within your plant.  Inputs are designed so that a standard Cat5 Ethernet cable with straight-through wiring can be used to connect the On-Air 85 directly to the logic output connector of a Wheatstone® Blade, or to the output port of our Axia GPIO Breakout. (Part Number A15-B01-2)  The inputs can also be used with any other type of GPO logic closure to ground such as computer GPIO logic cards or other open collector or dry contact based GPIO control signals.

Outputs:  Output to the end-user’s on air light is available on two screw terminal blocks that can accept up to 20AWG wire.  A positive (+) and negative (-) terminal are all that are needed to deliver power to the on-air light over two conductor low voltage wiring.

Power is provided by an included +12V 1A power supply.  The +12V is also available on the screw terminal outputs and can be used as an external power input or daisy-chaining the output of the +12v supply as long as the total current does not exceed the 1A rating of the supplied power supply.