We have currently suspended production of the Jelly Tally until further notice.  We will continue to provide support under the warranty terms for any units sold.  This page is remaining active to support those users who have already purchased the Jelly-Tally.

Sometimes you just need a little extra Jelly in your microphone Tally!  That is why we invented the Jelly- Tally Universal Microphone Tally System.  No more BORING plain red or white Tally Lights.  How about animated multicolors or even rainbow effects?  But, if standard red is your cup of tea, then no problem, it does that too! Use the white strobe for ringing phones, or animated green for cueing talent, or just MULTICOLOR FUNKADELIC rainbow light motion for the heck of it! 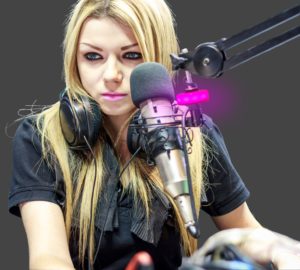 Microphone tally systems can be used in radio broadcast studios to indicate to the talent the fact that their microphone is live and potentially on the air. However until now, they could not do much more than this. The Jelly-Tally by NotaBotYet is a microphone tally system designed to be installed on any standard microphone boom. In addition, its thirty-one pre-programmed unique indications allow the end user to provide a host of different indications to the talent.

Pre-programmed indications range from standard steady displays of 7 different colors as well as many of those colors also being available in “theater-chasers,” “colors slides,” “strobe effects,” and “rainbow” effects. The end-user can decide what effect to use. A steady red can still mean the mic is live on the air, but yellow could mean it is being recorded; green could mean the studio is not live; sliding purple could mean that a show segment is coming to an end; strobing white could mean the phone is ringing; strobing red could mean the hotline is ringing; and the rainbow effect could mean nothing at all, and is on just for the fun of it! 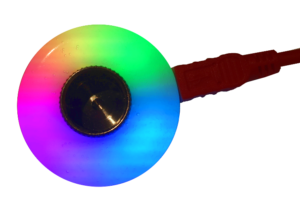 The Jelly-Tally system ships with two main components as well as with cables and a power supply. The Jelly-Tally indicator light is able to screw directly onto the threads of any 5/8″ 27 threads per inch male mount commonly found on standard microphone booms and stands. On the bottom of the indicator is a 5/8-27 mount, onto which the microphone mount can attach, sandwiching the indicator between the mic and the boom. 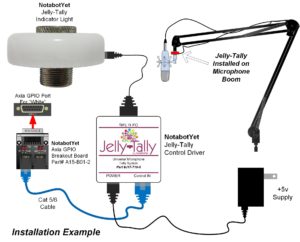